Book Review | Anatomy of a Scandal by Sarah Vaughan

Posted on December 19, 2017 by Danica Christina 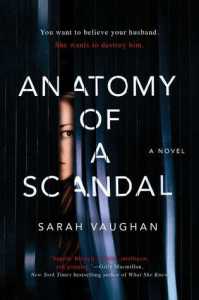 Summary (from Goodreads): An astonishingly incisive and suspenseful novel about a scandal amongst Britain’s privileged elite and the women caught up in its wake.

Sophie’s husband James is a loving father, a handsome man, a charismatic and successful public figure. And yet he stands accused of a terrible crime. Sophie is convinced he is innocent and desperate to protect her precious family from the lies that threaten to rip them apart.

Kate is the lawyer hired to prosecute the case: an experienced professional who knows that the law is all about winning the argument. And yet Kate seeks the truth at all times. She is certain James is guilty and is determined he will pay for his crimes.

Who is right about James? Sophie or Kate? And is either of them informed by anything more than instinct and personal experience? Despite her privileged upbringing, Sophie is well aware that her beautiful life is not inviolable. She has known it since she and James were first lovers, at Oxford, and she witnessed how easily pleasure could tip into tragedy.

Most people would prefer not to try to understand what passes between a man and a woman when they are alone: alone in bed, alone in an embrace, alone in an elevator… Or alone in the moonlit courtyard of an Oxford college, where a girl once stood before a boy, heart pounding with excitement, then fear. Sophie never understood why her tutorial partner Holly left Oxford so abruptly. What would she think, if she knew the truth?

Review: I sometimes browse the Goodreads Giveaway section and stumbled upon this book. Thought why not enter the giveaway. I never checked back on the status once it ended and was quite surprised when it arrived it my mailbox.

As the title suggests it is about a scandal that happens in the UK involving a member of parliament and one of his female colleagues. It is very character driven and you follow the multiple POVs of the characters past in college as well as the present with the legal court case. I am always interested in watching movies that involve court cases but I think that this is the first legal thriller that I’ve read. The subject matter of this case is something that is sadly prevalent now dealing with high-ranking individuals thinking they can get away with anything. The topic and definition of consent is discussed as well as rape.

The “twist” happens quite early in the book (roughly halfway) and I honestly figured it out before it was revealed in the book. Then the last half of the book just kind of dragged on. The case was done but the aftermath was slowly forming and building up to a mediocre finale.

I found this book to be intriguing and entertaining and I would recommend it to anyone who likes to read about scandals and legal thrillers.

Thanks to Goodsreads and Simon and Schuster for a copy of the book via a Goodreads Giveaway.

This entry was posted in book review and tagged anatomy of a scandal, ARC, book review, goodreads giveaway. Bookmark the permalink.