Posted on November 1, 2019 by Danica Christina 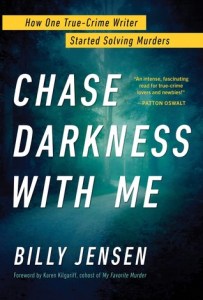 Chase Darkness With Me by Billy Jensen

Summary (from Goodreads):  Have you ever wanted to solve a murder? Gather the clues the police overlooked? Put together the pieces? Identify the suspect?

Journalist Billy Jensen spent fifteen years investigating unsolved murders, fighting for the families of victims. Every story he wrote had one thing in common―they didn’t have an ending. The killer was still out there.

But after the sudden death of a friend, crime writer and author of I’ll Be Gone in the Dark, Michelle McNamara, Billy became fed up. Following a dark night, he came up with a plan. A plan to investigate past the point when the cops had given up. A plan to solve the murders himself.

You’ll ride shotgun as Billy identifies the Halloween Mask Murderer, finds a missing girl in the California Redwoods, and investigates the only other murder in New York City on 9/11. You’ll hear intimate details of the hunts for two of the most terrifying serial killers in history: his friend Michelle McNamara’s pursuit of the Golden State Killer and his own quest to find the murderer of the Allenstown Four. And Billy gives you the tools―and the rules―to help solve murders yourself.

Gripping, complex, unforgettable, Chase Darkness with Me is an examination of the evil forces that walk among us, illustrating a novel way to catch those killers, and a true-crime narrative unlike any you’ve read before

Book Beginning: “It starts with an overhead shot – in color, but with no sound – of a man walking into a 7-Eleven. It’s late, well past 2:00 a.m., but the scene is glowing, the streetlamps working with the store signs to give off a glimmer you don’t usually see on the typical nighttime surveillance video.”

Page 56: “For Rolling Stone, I investigated how animal-rights citizen detectives used their web smarts to track down kitten killer Luka Magnotta in Canada. They pleaded with authorities to take their information and make an arrest, warning them that this guy would one day kill a person. No one listened until human body parts began showing up in the mail.”

Thoughts: I just finished this book this past weekend and absolutely enjoyed it. Being an avid true-crime podcast listener, and a weekly listener of the podcast Murder Squad with Paul Holes and Billy Jensen, I had to pick up Billy’s book. I devoured this book in one day that was part autobiographical and part behind-the-scenes on how Billy used social media skills and the public to help solve unsolved murders after the police had given up.

This entry was posted in book meme and tagged billy jensen, book meme, chase darkness with me, Friday Book Beginnings, The Friday 56. Bookmark the permalink.