Posted on February 18, 2020 by Danica Christina 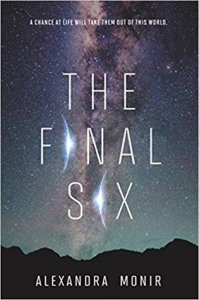 Summary (from Goodreads): When Leo, an Italian championship swimmer, and Naomi, a science genius from California, are two of the twenty-four teens drafted into the International Space Training Camp, their lives are forever altered. After erratic climate change has made Earth a dangerous place to live, the fate of the population rests on the shoulders of the final six who will be scouting a new planet. Intense training, global scrutiny, and cutthroat opponents are only a few of the hurdles the contestants must endure in this competition.

For Leo, the prospect of traveling to Europa—Jupiter’s moon—to help resettle humankind is just the sense of purpose he’s been yearning for since losing his entire family in the flooding of Rome. Naomi, after learning of a similar space mission that mysteriously failed, suspects the ISTC isn’t being up front with them about what’s at risk.

As the race to the final six advances, the tests get more challenging—even deadly. With pressure mounting, Naomi finds an unexpected friend in Leo, and the two grow closer with each mind-boggling experience they encounter. But it’s only when the finalists become fewer and their destinies grow nearer that the two can fathom the full weight of everything at stake: the world, the stars, and their lives.

Review: I went into this book only knowing that it was about the getting ready/trained for going into space. Nothing more — didn’t even read the synopsis! This book is set in the future (not a specific time which I think made it a but more realistic) when the Earth is being plagued with monstrous natural disasters, ruining cities and killing a large population.

The plot of the story didn’t seem realistic at all with 24 teenagers with only sheer weeks to learn how to use NASA technology, do a risky manoeuvre, and colonize another planet? However, pushing that thought aside I enjoyed watching the two main characters Leo and Naomi going through manipulations and starting a romance (hella insta love). There were a lot of lose threads and questions that went left unanswered.

When getting closer to the end of the story I wasn’t sure if I wanted to continue with the series but the last few chapters came out of nowhere and left me wanting to find out what happens on the journey to Europa.

All in all, great first read by Monir! I am excited to read the next one.

This entry was posted in book review and tagged alexandra monir, book review, fiction, science fiction, the final six, ya, ya reads. Bookmark the permalink.

2 Responses to Book Review | The Final Six by Alexandra Monir