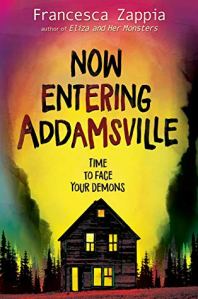 Summary (from Goodreads): Zora Novak has been framed.

When someone burns down the home of the school janitor and he dies in the blaze, everyone in Addamsville, Indiana, points a finger at Zora. Never mind that Zora has been on the straight and narrow since her father was thrown in jail. With everyone looking for evidence against her, her only choice is to uncover the identity of the real killer. There’s one big problem—Zora has no leads. No one does. Addamsville has a history of tragedy, and thirty years ago a similar string of fires left several townspeople dead. The arsonist was never caught.

Now, Zora must team up with her cousin Artemis—an annoying self-proclaimed Addamsville historian—to clear her name. But with a popular ghost-hunting television show riling up the townspeople, almost no support from her family and friends, and rumors spinning out of control, things aren’t looking good. Zora will have to read between the lines of Addamsville’s ghost stories before she becomes one herself.

Review: After reading Eliza and her Monsters by Zappia and it being the spooky season I had to pick this up in October. Unfortunately, I didn’t get around to this until this year and this also felt flat compared to Eliza.

For this story, I was expecting a bit more of a spook/paranormal factor. Nothing about this gave me those vibes. I feel like I don’t know much about the paranormal characters in this novel nor did I get an in-depth story as to how these creatures came to be. It just felt like we should have known what they were to begin with. What is a firestarter? Are your friends ghosts or real? Vampires?????

The main character irked me and had me rolling my eyes with the way she was acting and her inner dialogue. She was supposed to be 18 but it read more like 13. I couldn’t connect with any of the characters and got confused every time names were brought up because I couldn’t recall their relationship with the main character. The only relationship that I saw myself enjoying was between Zora and her cousin Artemis.

Currently, giving this 3 stars because it was just your average book and it gave me enough of a mystery plot that I wanted to see how it ended. As more time sinks in I may give this less than 3. Overall, just okay.

Still looking forward to picking up another book by Zappia though!