Posted on February 13, 2018 by Danica Christina 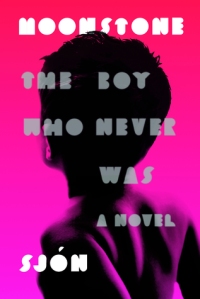 Summary (from Goodreads): The mind-bending miniature historical epic is Sjón’s specialty, and Moonstone: The Boy Who Never Was is no exception. But it is also Sjón’s most realistic, accessible, and heartfelt work yet. It is the story of a young man on the fringes of a society that is itself at the fringes of the world–at what seems like history’s most tumultuous, perhaps ultimate moment.

Máni Steinn is queer in a society in which the idea of homosexuality is beyond the furthest extreme. His city, Reykjavik in 1918, is homogeneous and isolated and seems entirely defenseless against the Spanish flu, which has already torn through Europe, Asia, and North America and is now lapping up on Iceland’s shores. And if the flu doesn’t do it, there’s always the threat that war will spread all the way north. And yet the outside world has also brought Icelanders cinema! And there’s nothing like a dark, silent room with a film from Europe flickering on the screen to help you escape from the overwhelming threats–and adventures–of the night, to transport you, to make you feel like everything is going to be all right. For Máni Steinn, the question is whether, at Reykjavik’s darkest hour, he should retreat all the way into this imaginary world, or if he should engage with the society that has so soundly rejected him.

Review: I had to pick this up once I found out it was set in Reykjavik and had to do with the 1918 Spanish influenza. It is the first book I’ve read by Sjon but my second Icelandic written novel translated to English. I felt that some parts of it were untranslatable so “…” was put in it’s place or it was intentional and I completely missed the boat.

I liked getting a little lesson about how the flu spread throughout Iceland during that time. The the chapters were quite short which made the short read feel even shorter. As well as the representation of LGBTQ. What I didn’t like was how some of the translation did properly correlate, opening scene was kind of graphic and the last few chapters were confusing.

I feel like I was able to grasp a hidden meaning but I’m not quite sure.

I would recommend this to those wanting to read a translated book by an Icelandic author and like World War 1 historical fiction.