Book Review | Between You and Me by Lynn Turner

Posted on September 20, 2017 by Danica Christina 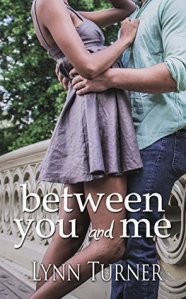 Between You and Me by Lynn Turner
Published by: The Wild Rose Press on September 20th, 2017
Genre: Romance, Contemporary
Pages: 338
Format: eARC
Source: Kindly sent from the author for an honest review

Finn survived the crash that killed his parents when he was sixteen. Twenty years later, his smart devices are about to redefine what it means to be disabled.

Emanuela makes dreams come true for a living, but still longs to fulfill her own. Despite Finn’s stunning secret, she thinks his idea might be worth the risk…and he’s determined to show her that he is, too.

Review: Lynn kindly reached out to me and provided me with a copy of her first book. I read the synopsis and I was definitely interested so I said yes. Between You and Me is a contemporary romance with two characters, Finn and Emmanuela, who have very different backgrounds/lives. It followed the plot line of a typical romance novel which I find lacked a little conflict. There was definitely conflicts in the novel but I find it was very surface level and easily solved. A lot did seem to be conveniently happening. The narration of the two characters flowed nicely and I found she captured time quite well throughout the story. I didn’t find myself wanting to put the book down and pick it up later. I read it piece by piece everyday wanting to know how the characters resolved.

There is a lot of things in here that is different then the typical romance novels on the market today as they are an interracial couple and Finn is a below the knee amputee. I like how he showed that his life still was as normal as every one else’s and that he was using his intelligence to help create the same feeling to those in the same situation as himself.

For a first novel this was fantastic as it didn’t feel like a first novel. I would recommend this to anyone who likes to read romance novels.

This entry was posted in book review and tagged ARC, between you and me, book review, lynn turner. Bookmark the permalink.