Book Review | A Book of Spirits and Thieves by Morgan Rhodes 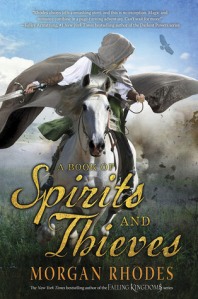 A Book of Spirits and Thieves by Morgan Rhodes
Published by: Razorbill on June 23rd, 2015
Genre: YA, Fantasy, Magic
Pages: 359
Format: eBook
Source: Borrowed from the Library

Summary (from Goodreads): Worlds collide in this suspenseful, page-turning Falling Kingdoms spin-off series, which explores a whole new side of Mytica—and an even darker version of its magic.

Crystal Hatcher, Modern-day Toronto: It’s a normal afternoon in her mother’s antique bookshop when Crys witnesses the unthinkable: her little sister Becca collapses into a coma after becoming mesmerized by a mysterious book written in an unrecognizable language.

Maddox Corso, Ancient Mytica: Maddox Corso doesn’t think much of it when he spots an unfamiliar girl in his small village. Until, that is, he realizes that she is a spirit, and he is the only one who can see or hear her. Her name is Becca Hatcher, and she needs Maddox to help get her home.

Farrell Grayson, Modern-day Toronto: Rich and aimless Farrell Grayson is thrilled when the mysterious leader of the ultra-secret Hawkspear Society invites him into the fold. But when he learns exactly what he has to do to prove himself, Farrell starts to question everything he thought he knew about family, loyalty, and himself….

Fate has brought these young people together, but ancient magic threatens to rip them apart.

Review: I really didn’t know much about this book going into it other than the fact that a lot of people like Morgan Rhodes Falling Kingdom novels and the fact that this took place in Toronto. If you haven’t noticed the theme recently I have been devouring all the books that I can find that mention Toronto or Ontario. Maybe it’s the pride in knowing that people actually decide to write books about where I am from or the fact that it’s nice to actually visualize the areas mentioned as I’ve seen them before.

As this is a spin-off series of Falling Kingdoms as I have just become aware of as I write this review I think I would’ve gotten a better understanding of Mytica as I believe that’s where that series takes place (correct me if I’m wrong). It’s not that those chapters were confusing but it would’ve been nice to sense that same familiarity that I got with the modern day ones. I thought that the 3 perspectives were quite interesting. At first I didn’t know how I felt about it but it was pretty easy to understand. I liked how the two sisters kept both worlds linked to one another. There were a lot of characters but they weren’t hard to forget as they came into play. I hate being confused when a character pops up and I don’t know if it’s there first time in the book or if they’ve been introduced already!

The plot was pretty predictable. I wasn’t shocked at anything that happened. The pacing felt a bit slow. I feel like nothing too exciting happened that made me anxious to see what was in store on the next page. I did however like that there was a secret society involved and now I want to seek out more secret society novels! So if you have any recommendations please let me know!

This entry was posted in book review and tagged a book of spirits and thieves, book review, fantasy, morgan rhodes, ya. Bookmark the permalink.