Book Review | A Thousand Pieces of You by Claudia Gray 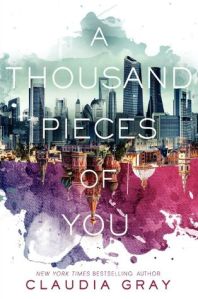 A Thousand Pieces of You by Claudia Gray
Published by: Harper Teen on November 4, 2014
Genre: YA, Science Fiction, Fantasy, Romance
Pages: 360
Format: eBook
Source: Borrowed from the library

Summary (from Goodreads): Cloud Atlas meets Orphan Black in this epic dimension-bending trilogy by New York Times bestselling author Claudia Gray about a girl who must chase her father’s killer through multiple dimensions.

Marguerite Caine’s physicist parents are known for their groundbreaking achievements. Their most astonishing invention, called the Firebird, allows users to jump into multiple universes—and promises to revolutionize science forever. But then Marguerite’s father is murdered, and the killer—her parent’s handsome, enigmatic assistant Paul— escapes into another dimension before the law can touch him.

Marguerite refuses to let the man who destroyed her family go free. So she races after Paul through different universes, always leaping into another version of herself. But she also meets alternate versions of the people she knows—including Paul, whose life entangles with hers in increasingly familiar ways. Before long she begins to question Paul’s guilt—as well as her own heart. And soon she discovers the truth behind her father’s death is far more sinister than she expected.

Review: I was not expecting this when I started reading this book. It was so good. I had to immediately borrow the second book from the library before I finished this one because I knew I needed to find out what happened next instantly.

For a book with dimension travel and a lot of the characters being physicists I thought that it would be very fact heavy and that the technical information might be too much but the information you need to understand what is going on is fed to you slowly which keeps the pace at a fantastic speed. There wasn’t a moment where I was like, “wait what?”.

There is what appears to be a love triangle in the book but it wasn’t that annoying as most seem to be. She struggles between the two but her choice is clearly obvious. And the romance that happens between the two of them made my heart melt. There love carries through into each of the dimensions they travel to and I thought that was really sweet.

Overall, I really enjoyed this and I can’t wait to see where the second one goes. Highly recommend!

This entry was posted in book review and tagged a thousand pieces of you, book review, claudia gray. Bookmark the permalink.