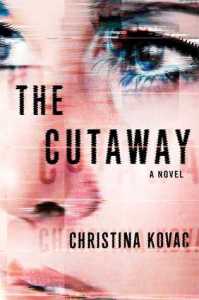 Synopsis (from Goodreads): The Cutaway draws you into the tangled world of corruption and cover-up as a young television producer investigates the disappearance of a beautiful Georgetown lawyer in this stunning psychological thriller, perfect for fans of Paula Hawkins and Gillian Flynn.

When brilliant TV news producer Virginia Knightly receives a disturbing “MISSING” notice on her desk related to the disappearance of a beautiful young attorney, she can’t seem to shake the image from her head. Despite skepticism from her colleagues, Knightly suspects this ambitious young lawyer may be at the heart of something far more sinister, especially since she was last seen leaving an upscale restaurant after a domestic dispute. Yet, as the only woman of power at her station, Knightly quickly finds herself investigating on her own.

Risking her career, her life, and perhaps even her own sanity, Knightly dives deep into the dark underbelly of Washington, DC business and politics in an investigation that will drag her mercilessly through the inextricable webs of corruption that bind the press, the police, and politics in our nation’s capital.

Harkening to dark thrillers such as Gone Girl, Luckiest Girl Alive, and Big Little Lies, The Cutaway is a striking debut that will haunt you long after you reach the last page.

Review: It’s no surprise that this book appears to be well researched and knowledgeable in the subject matter as Christina Kovac “worked for seventeen years managing Washington, DC newsrooms and producing crime and political stories in the District” (x).

The entire novel is written in Virginia Knightly’s POV which makes it quite easy to follow the goings on of the book. As interesting as it is to see into other perspective’s having one with a genre like this is ideal. The plot of the story was easy to follow and it flows quite effortlessly throughout each chapter. I didn’t find that the book dragged at any point which sometimes is hard to come by I find. The characters felt a bit flat for me. I don’t think I was able to fully grasp who Virginia was. I guess I was more focused on figuring out “whodunnit”. In short, I would say that this novel is very plot-driven instead of character-driven.

Is it really realistic for a producer of a news station to go into that depth of figuring out the truth? I guess she would know more that I on the realities of the profession being part of it for that period of time. (Upon reading the Q&A section that appears in this post my question is answered!).

Every month I like to read one of these mystery/thriller novels because even though they’re similar in trying to find that villain/bad guy/the truth it is always a different approach to the matter and a different type of main character. I wouldn’t compare this novel to Gillian Flynn’s Gone Girl, but it was pretty good nonetheless.

This is a great debut novel for Christina Kovac! If she decides to write another novel I would pick it up!

3 Responses to Book Review | The Cutaway by Christina Kovac