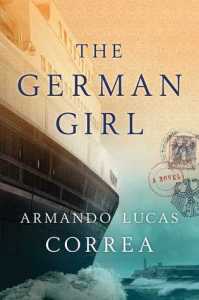 Synopsis (from Goodreads): A stunningly ambitious and beautiful debut novel, perfect for fans of Sarah’s Key and All the Light We Cannot See, the story of a twelve-year-old girl’s harrowing experience fleeing Nazi-occupied Germany with her family and best friend, only to discover that the overseas asylum they had been promised is an illusion.

In 1939 before everything changed, Hannah Rosenthal lived a charmed life. Her family moved in Berlin’s highest social circles, admired by friends and neighbors. Eleven-year-old Hannah was often taken by her mother for an afternoon treat at the tea room of the beautiful Adlon Hotel, both dressed in their finest clothes. She spent her afternoons at the park with her best friend Leo Martin. But, in an instant, that sunlit world vanished. Now the streets of Berlin are draped with red, white, and black flags; their fine possessions are hauled away, and they are no longer welcome in the places that once felt like home. The two friends make a pact: come what may, they promise to have a future together.

As Hannah and Leo’s families desperately begin to search for a means of escape, a glimmer of hope appears when they discover the Saint Louis, a transatlantic liner that can give Jews safe passage to Cuba. After a frantic search to obtain visas, the Rosenthals and the Martins depart from Hamburg on the luxurious passenger liner bound for Havana. Life aboard the ship is a welcome respite from the gloom of Berlin—filled with masquerade balls, dancing, and exquisite meals every night.

As the passengers gain renewed hope for a bright future ahead, love between Hannah and Leo blossoms. But soon reports from the outside world began to filter in, and dark news overshadows the celebratory atmosphere on the ship; the governments of Cuba, the United States, and Canada are denying the passengers of the St. Louis admittance to their countries, forcing them to return to Europe as it descends into the Second World War. The ship that had seemed their salvation seems likely to become their death sentence.

After four days anchored at bay, only a handful of passengers are allowed to disembark onto Cuban soil, and Hannah and Leo must face the grim reality that they could be torn apart. Their future is unknown, and their only choice will have an impact in generations to come.

Decades later in New York City on her eleventh birthday, Anna Rosen receives a mysterious envelope from Hannah, a great-aunt she has never met but who raised her deceased father. In an attempt to piece together her father’s mysterious past, Anna and her mother travel to Havana to meet Hannah, who is turning eighty-seven years old. Hannah reveals old family ties, recounts her journey aboard the Saint Louis and, for the first time, reveals what happened to her father and Leo. Bringing together the pain of the past with the mysteries of the present, Hannah gives young Anna a sense of their shared histories, forever intertwining their lives, honoring those they loved and cruelly lost.

Review: This was such a beautifully written book. I can’t believe it is this authors debut novel. I love historical fiction specifically around the WWII era because authors bring different aspects to life. I remember hearing about the St Louis (I think) way back in high school but this novel made me feel like I was experiencing it myself. You are put in Hannah shoes as you go through her life in Germany, on the St. Louis then finally in Cuba.

It was interesting as you saw it happening through multiple ages in Hannah’s life. All the hardships that her family had to endure. The aspect of having a relative who is the same age (Anna) as Hannah was when the book began made the past and the present melt together.

The Writing: The writing was fantastic. It made Berlin, Cuba, the S.S. Louis and New York so visual and real.

The Plot: Fleeing Nazi-Germany to Cuba, some allowing to disembark to Cuba, some turned away to be taken in as refugees only to be found again, 9/11, Cuban revolution, life in Cuba for the refugees, Cuba rounding up Jehovah’s Witnesses… the list goes on for all the history that happened in the timeline of this novel. It was so unbelievably researched. I wouldn’t be surprised if this novel is used in high school to give the students a powerful visual/experience to go along with their teaching methods.

The Characters: Hannah was the main protagonist. It was saddening to watch her be this happy kid running around with her best friend Leo during a bad time and watching how she slowly changes into someone who doesn’t believe in anything anymore. All she suffers is loss and her family goes through so many hardships. They leave one terrible situation and end up in another. I don’t get why she stayed on the island but I also understand why she did. In addition, hearing these things happen through the perspective of a child was rough. She knew something bad was happening but she couldn’t understand why. Anna was another great protagonist. It was a great contrast between the two related characters. We find that Anna is Hannah’s grand-niece. She was so interested in her father’s past as she never got to meet him. I’m glad she got to go to Cuba and meet Hannah and learn about his past and give Hannah a chance to let go.

Overall, great novel. I had moments where my eyes got teary whilst reading on the subway. I can never get over how these things happened in the past and I can’t imagine being in the centre of it. I would love to read something else written by this author if he so chooses to in the future. I don’t give out 5 stars lightly (as one can see if they look at my Goodreads page) but I highly recommend this one!

This entry was posted in book review and tagged book review. Bookmark the permalink.