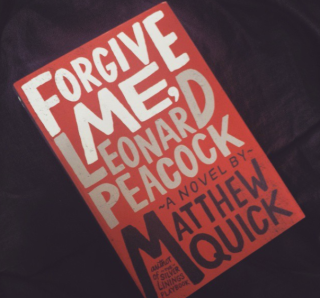 Published: August 13th, 2013
Publisher: Little Brown Books
Source: Purchased
From Goodreads: Today is Leonard Peacock’s birthday. It is also the day he hides a gun in his backpack. Because today is the day he will kill his former best friend, and then himself, with his grandfather’s P-38 pistol.
But first he must say good-bye to the four people who matter most to him: his Humphrey Bogart-obsessed next-door neighbor, Walt; his classmate, Baback, a violin virtuoso; Lauren, the Christian homeschooler he has a crush on; and Herr Silverman, who teaches the high school’s class on the Holocaust. Speaking to each in turn, Leonard slowly reveals his secrets as the hours tick by and the moment of truth approaches.
In this riveting look at a day in the life of a disturbed teenage boy, acclaimed author Matthew Quick unflinchingly examines the impossible choices that must be made—and the light in us all that never goes out.
Review: I bought this book because I knew the author, Mathew Quick, wrote Silver Linings Playbook – which I haven’t read but loved the movie. I gave the summary a read and was intrigued about it right off the bat. I picked it to take a break from a long, depressing book but clearly I wanted to stick with depressing.
I honestly don’t know how I feel like this book. I couldn’t get attached to it as some readers have. The topics presented were upsetting and they did hit me in that aspect. Maybe because the narrator was a male and I couldn’t fully relate to it. Maybe because I haven’t been in a school for a while. Maybe because my family life isn’t dysfunctional.
I felt I was more interested in what Herr Silverman was hiding under his sleeves than if Leonard actually went through with his plans.
Overall, it was a quick and enjoyable read. I would pick up another Matthew Quick book in the future.
Rating: 3/5 stars!