Posted on February 10, 2015 by Danica Christina 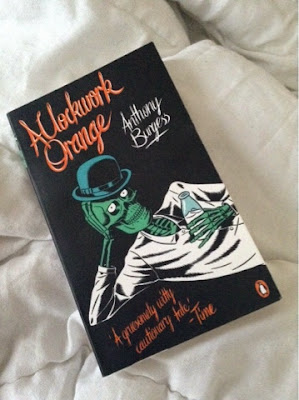 Published: April 1st, 2011 (first published 1962)
Publisher: Penguin
Source: Purchased
Summary: A Clockwork Orange is as brilliant, transgressive, and influential as when it was published fifty years ago. A nightmare vision of the future told in its own fantastically inventive lexicon, it has since become a classic of modern literature and the basis for Stanley Kubrick ‘s once-banned film, whose recent reissue has brought this revolutionary tale on modern civilization to an even wider audience. Andrew Biswell, PhD, director of the International Burgess Foundation, has taken a close look at the three varying published editions alongside the original typescript to recreate the novel as Anthony Burgess envisioned it. We publish this landmark edition with its original British cover and six of Burgess ‘s own illustrations.

Review: Quite disturbing with all that ultraviolence but the writing is phenomenal. I like how the nadsat grows on you and becomes obvious knowledge. When I first picked up the book it took forever to get through a few pages but as the story progresses you figure out what these slang terms means and the pages just keep turning and turning.

I am interested to see how Kubrick turned this classic into film.
Highly recommend reading this novel.

This entry was posted in books, review. Bookmark the permalink.